Local people can nominate any project they think is special by tagging SCT on social media @scotcivictrust;  or by answering a few questions here.

Community groups can also directly apply through the My Place website.

ANY QUESTIONS…. This email address is being protected from spambots. You need JavaScript enabled to view it..

Last year, a landmark report by the United Nations warned that, unless urgent action is taken, the opportunity to avoid the worst effects of climate change will be missed.

The Climate Change Plan Scotland 2018 set out the continuing actions of Scottish Government to ensure Scotland meets the climate challenge. Following on from this, Scotland became the first country to declare a climate emergency in early 2019 and the Climate Change Bill 2019 set a challenging national target for Scotland to be Carbon Neutral by 2045.

The City of Edinburgh Council recognises the vital role of local government in addressing climate change and in May formally declared a climate emergency and committed to becoming a carbon-neutral city by 2030.

This consultation can be completed at https://consultationhub.edinburgh.gov.uk/ce/edinburghtalksclimate/

In October 2019 the City's Transport and Environment Committee recently examined a report on this from a London perspective.

You can download this HERE
Further roads are to be considered for inclusion in the 20mph scheme.

City of Edinburgh Council is also proposing that the City achieve Net Zero Carbon by 2030-7.

This report is also available HERE

Scottish Gas Networks and Kier, their contractor have completed Phase 1 & 1a and Bridge Road will open on Sunday 3rd November. The full programme with not finish until May 2020 culminating at Dreghorn Link. Details of the individual phases are indicated in a presentation. Click on the images to see the presentation. 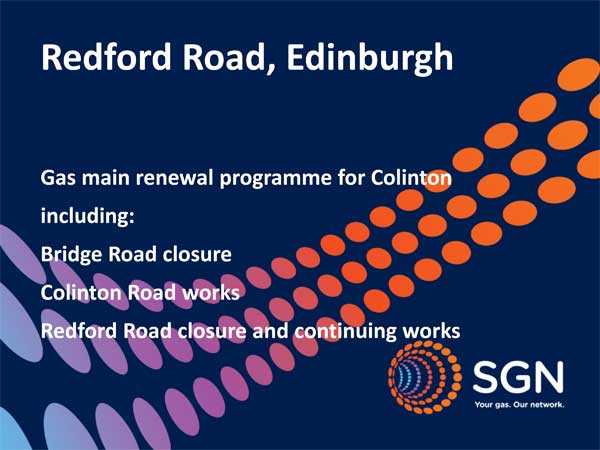 We have prepared some information on Japanese Knotweed for private owners of property. Click this link to read it.

The City of Edinburgh Council have an invasive weeds team to deal with both Japanese Knotweed and Giant Hogweed on Council owned land. For further information follow the links below.

It has been suggested that website visitors might find the following links to local online publications helpful. These are the Colinton Newsletter and Dell Directory

Other links to relevant websites are in our LINKS page

There are no more Tweets in this stream.

Website User Notice: Various web browsers are being updated to display a warning that the connection is insecure if the site has a form. This is to indicate that users should not enter personal data such as bank details etc. Colinton CC does not ask for such details nor does it store personal details on this website. See our Privacy Policy for more details